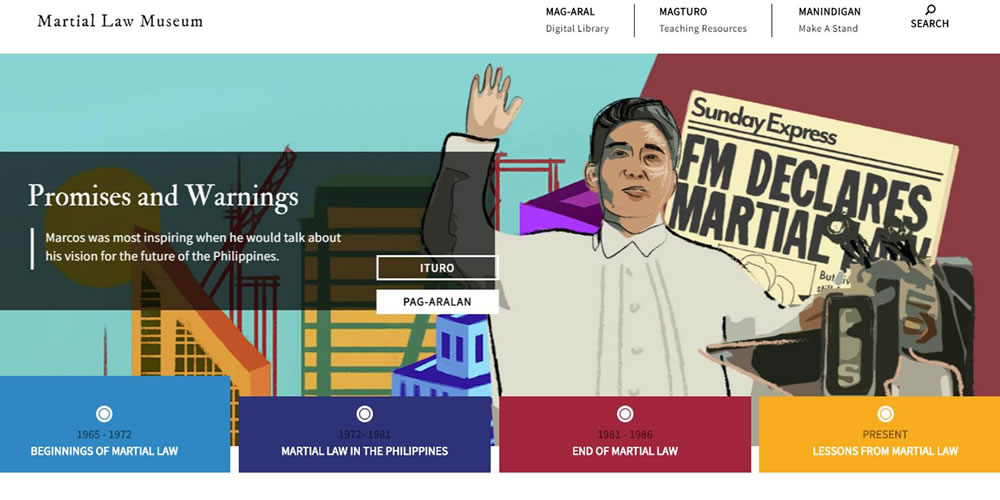 The longest-running presidential rule in the Philippines under Ferdinand Edralin Marcos ran from 1965 – 1986. A fraction of that twenty-year period (re)defined his presidency — the Martial Law.

It was on September 21, 1972, Thursday, through a TV broadcast that it was announced that the entire nation will be placed under the Martial Law. Following the Proclamation No. 1081, the effectivity was to be implemented the following day, Friday at 9pm. “I am utilizing the proclamation of martial law for one purpose alone: to save the Republic and reform society,” relayed by the Chief Executive. With the reverent assurance of then-President Marcos that the imposition of martial law is not to be equated to a military takeover, or that limitations will be set in accordance to the situation and reason, what transpired in the next years was unprecedented to say the least.

Forty-five years hence, it is apparent that the call for remembrance extends beyond the recognition of that significant episode in Philippine history. With the more recent turn of events in the last 2 years – the burial of former-President Marcos to the Libingan ng mga Bayani with full-military honors (November, 2016), and the implementation of the a limited-scoped Martial Law in Mindanao (May, 2017) in light of the conflict in Marawi, among many other (arguably) unrelated but familiar pronouncements in the news –- the anxieties of the past are evoked. It is in this light that institutions like museums, and libraries, recognize its role in society. The 2017 International Museum’s Day theme, “Museums and contested histories: Saying the unspeakable in museums,” resonates with this.

An interesting development all over the world is a continued drive for the establishment of memorial museums that not only narrate and commemorate but also instills an active remembering on the part of the museum audience— to see history as relevant. These specific kinds of museums are grounded on a commitment to human rights, the mediation with trauma, and efforts towards understanding, peace, and envisioning of a shared future amidst the multiplicity of experiences and cultures of remembrance.

For a nation like ours, with a history that is marred by a series of tumultuous losses, lapses and horrific events, it is important to also present the triumphs that highlight the strength of human spirit, love for country and commitment to what is just and humane. The responsibilities that museums and libraries hold in developing a culture puts premium to responsible presentation and scholarship on these historical events and whose approach to the re-telling of history undercurrent is through an engaging and discursive (and not prescriptive) education within and beyond the confines of formal instruction.

Last September 22, Knowledge Channel (an institutional partner of the Martial Law Museum), also collaborated with the Lopez Museum and Library in mounting a small exhibit in tandem with the lecture titled Martial Law: Echoes of the Past, Lessons for the Future held at the RBC Training Rooms 3 – 5. The exhibit featured materials that underscored the role of the youth movement, in particular, students during the years prior to the Martial Law declaration (1969 – 1972). All of the materials included in the exhibition came from the Lopez Library and photo archives, including those from the donated archives of Manila Chronicle and Manila Times.

In the next few weeks, the Lopez Museum and Library through its website will be featuring materials by scholars, journalists, writers, artists and other first-hand accounts that will shed light on the years of Marcos rule. These will also include recent publications that are part of the library holdings that engage with that era through the lenses of diverse perspectives and fields. As a resource center, the Lopez Museum and Library welcomes the public to learn more about the past and make informed and grounded opinions in light of the present threat of misinformation and prevalence of fake news.

The Lopez Library is open to the public from Mondays to Saturdays, 8am – 5pm. For inquiries and concerns, emailThis email address is being protected from spambots. You need JavaScript enabled to view it. or call (+632) 631 2425.