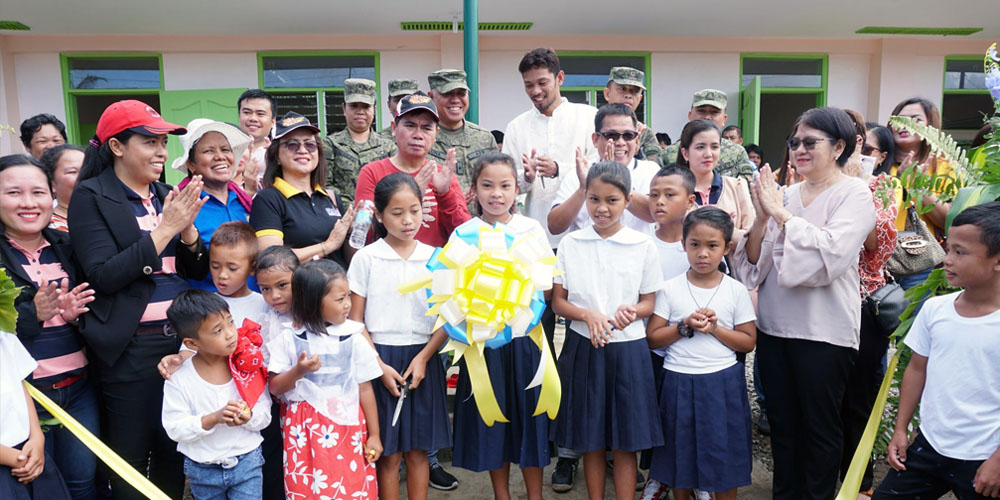 Yabon Elementary School is a modest little school in Brgy. Yabon Hinabangan, Samar. It currently has 92 students and four teachers. However, in 2013, Super Typhoon Yolanda took their two (2) Marcos-type classrooms away, leaving the students and teachers to conduct their classes in 70% damaged classrooms. The parents tried to repair and put them together just for their kids to have a place to study. These classrooms did not even have concrete floors ever since. It was all muddy because of raining.

Almost six years after, children are now safe inside the three typhoon-resilient classrooms as the ABS-CBN Sagip Kapamilya turned-over the new classroom building through the donations following Super Typhoon Yolanda.

The unit was built by the community through bayanihan with the supervision of 53rd Engineering Brigade of the Philippine Army. By working together, with their bare hands, building the new classrooms for their children, the community learned to own the project. It is one of Sagip Kapamilya’s maxims – for the community to feel that the project is theirs.

“It wasn’t easy,” said Mercelita Arraz, Yabon ES Principal. The materials had to travel from Catbalogan to Hinabangan which was more or less eight kilometers in distance. “With the distance and with the rough roads that one has to pass just to go here, we knew it will be hard to look for a contractor to build the classrooms, but all of us wanted this to happen. We needed the classrooms and we were willing to work together to build them for our children,” she added.

The ribbon cutting during the turn-over ceremony

Arraz recalled how the parents took turns in carrying the sacks of materials, different tools to complete the classrooms, and how the soldiers put down their guns and stayed with them to help.

Richard Abajano, a grade 5 student, shared how a kid like him started to become friends with the soldiers. He said they used to play different games with their Kuyas’ (soldiers) cellphone. Likewise, he is happy and excited to use the new classrooms which his Mother, Mary Jane, also helped during the construction. She was one of the mothers who cooked the meals for the builders.

Richard with one of his Kuyas

“Salamat po sa pagbibigay sa amin ng magandang classrooms (Thank you for giving us these beautiful classrooms),” the grade 5 student said. “Salamat din po sa pagsuporta at pakikipagkaibigan sa amin (I would also like to thank them for their support and letting us to be friends with them).”

“Masaya kasi ngayon, mas ligtas na ang mga classroom kaysa dati (I am very happy because the classrooms are now safe for the students unlike before which were just made of light materials),” his mother said.

Ria Rola, Sagip Kapamilya’s Relief and Rehabilitation Officer shared, “It is a first time for Barangay Yabon to be a beneficiary of classrooms from any organization.” She also said that school construction is one of the main projects of Sagip Kapamilya as they believe in assisting children in rebuilding their dreams after a disaster, aside from giving immediate assistance in calamity-stricken areas through relief operations.

Last year, Brgy. Yabon also received a Barangay Health Station (BHS) with birthing facility. It was complete with medical supplies, medicines, and equipment. Its midwife, Evelyn Abarracoso, used to vaccinate kids and do prenatal, post-natal check-ups, and family planning seminars at home or under the trees. But now, for 2019, they already consulted 62 patients under the BHS roof. Mothers who will have a normal delivery no longer have to spend PHP75.00 in riding a habal-habal (single motorcycle) or endure the three to four-hour walk just to reach a birthing facility or the Rural Health Unit. The BHS was also completed through bayanihan of the community.

Each pillar of the classrooms and the BHS is made stronger not just because of the design and of standard materials, but because of love and compassion from the donors to the partners and parents who selflessly built them.