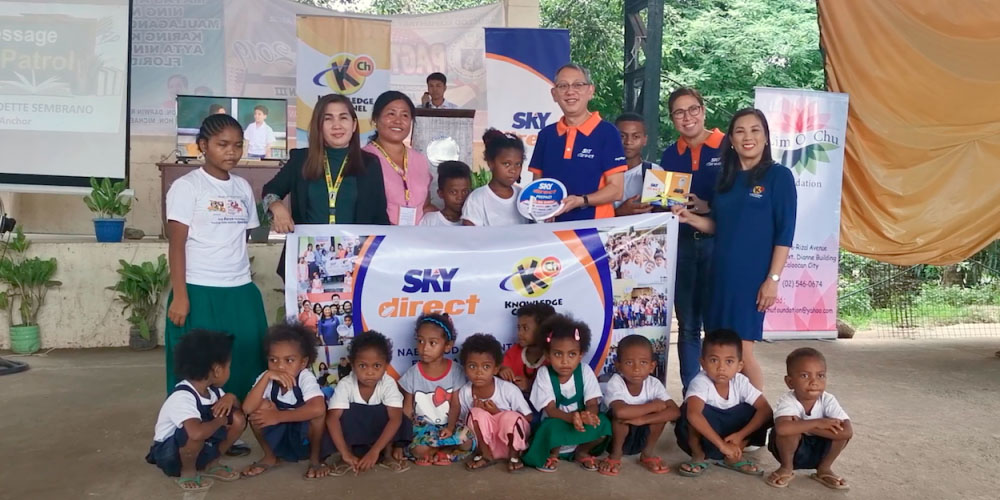 An Aeta school in Pampanga received a Gift of Knowledge package which included a brand new television and a SKY Direct satellite dish.

The aftermath of the 6.1 magnitude earthquake that rocked Pampanga last April 22 left several areas near the epicenter distressed and in need of support. One of them is Nabuclod Elementary School in Floridablanca, Pampanga, a learning community attended by around 500 Aeta learners. According to school principal Jocelyn L. Atun, 4 buildings were severely damaged, one of them was beyond repair and can no longer be used. “Yung mga walls lumobo, yung flooring nabitak,” she shared. Temporary learning spaces had to be set up in the school gym until the new building was ready.

True to being in the service of the Filipino, SKY and Knowledge Channel Foundation, along with TV Patrol, brought assistance to the school last July 8 by bringing a food truck that served hot meals, items from generous sponsors, and the delivery and installation of SKY Direct and a television set so kids and teachers can easily watch Knowledge Channel.

SKY Cable Corporation is the pay television and broadband arm of ABS-CBN, the Philippines’ leading media and entertainment company.

More public schools in the country can benefit from learning with media and technology. To be a sponsor of Knowledge TV, email This email address is being protected from spambots. You need JavaScript enabled to view it..

About Knowledge Channel Foundation Inc.
Knowledge Channel Foundation, Inc (KCFI) is a non-government, not-for-profit organization that works to help uplift the life of the Filipino through media and technology. Specifically, it develops and distributes curriculum-based multimedia learning resources (such as videos, games, session guides, etc.) for preschool, K-to-12, and the Alternative Learning System, online, on-demand, and on-air via the Knowledge Channel shown in the various platforms of the Philippines’ leading media and entertainment company, ABS-CBN Corporation, such as ABS-CBN, ABS-CBN TVplus, and SKYcable. It also implements professional development programs