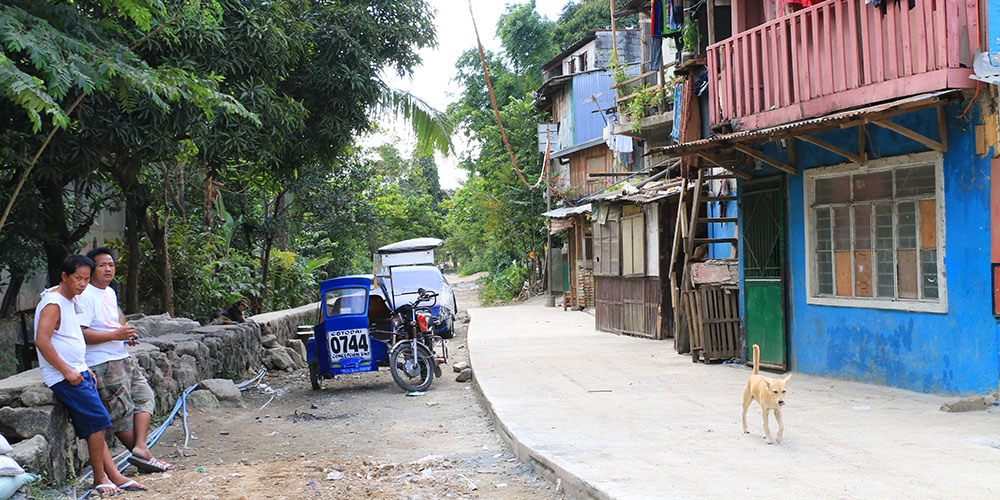 New linear park in Palay Creek, Brgy. Tumana, Malanday. The linear park is 700-meter long and 3-meter wide, with different ornamentals planted alongside. It also has posts with shade where people can rest.

Residents of Brgy. Tumana in Marikina City can now walk with ease with the newly-developed 700-meter linear park along the Tumana-Malanday Creek or also known as Palay Creek.

To Riza Mantaring, Sun Life Foundation’s Chairperson, one of Sun Life’s thrusts is the protection of the environment and they saw the benefit of rehabilitating the linear park especially to the residents of Brgy. Tumana. “Maganda ang proyektong ito kasi nakakatulong ka nang linisin ang Ilog Pasig, gaganda rin ang buhay ng mga nakatira rito,” she said. “(Ngayong tapos na ang linear park,) Nakikita mo ‘yung mga bata, mga nakatira rito, meron na silang mapapaglaruan, (meron na silang lugar) kung saan pwede mag relax.” (This is a good project because aside from helping clean the Pasig River, it also transforms the lives of the residents. Now that the linear park is finished, we can see the children and the residents play along it and they now have a place where they can relax.)

Before the development of the linear park

Sun Life Foundation also partnered with ALKFI-BayaNiJuan in 2010. Its partnership has grown more than providing shelter to the residents of the community of Southville 7. Sun Life Foundation committed PHP49 million to help improve lives of families living in Southville 7, Calauan, Laguna. A portion of the donation amounting to PHP 9.69 million was used to build 114 Panibahay units for families that came from Estero de Pandacan and Estero de Paco in Manila. These families were transferred to safer homes by National Housing Authority as part of rehabilitating the Pasig River. They used to live in places prone to flooding.

In one of his speeches, Hon. Marcy Teodoro, Mayor of Marikina City, said that because of the funding for the 700-meter linear, the city’s budget allocated for it will be used to develop the other side of the creek instead. He also said that there is already a funding for the remaining meters from the end of the developed 700-meter until River Park.

In fact, during the course of constructing the linear park, Bantay Kalikasan together with its partners on the project, held an environmental summit where homeowners and participants from Concepcion Integrated School and Pamantasan ng Lungsod ng Marikina learned from different environmental tips and ordinances discussed. Earth Warrior Trainings were also done to the home owners to encourage them to work together to continue protect and preserve their community. Before the project was officially turned-over, residents and partners also had a clean-up and planting activity on the creek and along the park. Through these activities, Bantay Kalikasan hopes that the community will own the project as they were heavily involved throughout the process.

“Aside from transforming the place, we also want to transform lives of the residents. We want them to own this project and be empowered enough to feel that this project is theirs,” Santos exclaimed. “As we turn-over the project, the City of Marikina accepts the responsibility of maintaining the cleanliness of the place not only in the level of construction and infrastructure but also in the level of how the community takes care of it.”