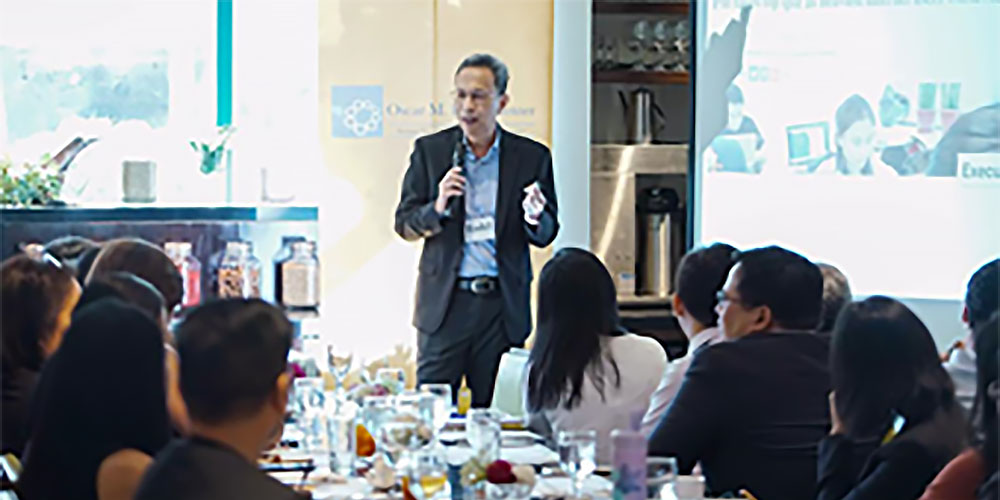 Climate scientists are in agreement that the next 12 months are critical for the survival of life on earth. While the Paris Agreement sets out plans for countries to cut carbon emissions by 45% by 2030, that plan can only come to fruition if countries significantly harden their carbon reduction targets by the end of 2020.

Regardless of diplomatic and political developments, the Philippines remains to be one of the most vulnerable countries to climate change. And according to the upcoming State of the 2018 Philippine Climate (in press), the Philippine climate continues to get warmer and warmer, rainfall patterns are changing, and extreme weather events are affecting more and more Filipinos.

To develop the resilience of the vulnerable, the Oscar M. Lopez Center further deepens its mission by harnessing science that is co-produced and actionable. The Center believes that resilience-building can be developed through more targeted awareness-raising initiatives, and co-produced actionable knowledge projects. For 2020, the Center is looking to ramp up efforts to ensure the usability of climate information, believing that effective communication of climate information to relevant stakeholders and decision-makers is one key step towards building a more climate-resilient society.

Part of the changes that the Center is making towards usability includes moving our branded research and publications into more dynamic directions in terms of content and packaging. The State of the Philippine Climate series and the Climate, Disaster and Development Journal, for example, are undergoing reviews to become more aligned with their target users and to reduce the gap between science and action.

Last year, the Center also had the opportunity to conduct the “Study on the Implications of Intergovernmental Panel on Climate Change’s Special Report on Global Warming of 1.5°C to the DENR’s Plans and Programs” in partnership with the United Nations Development Programme (UNDP) and the Department of Environment and Natural Resources (DENR). The four-month initiative, funded by the International Climate Initiative (IKI) of the German Federal Ministry for the Environment, Nature Conservation and Nuclear Safety and managed by the UNDP, involved analyzing how the DENR’s ten priority programs can be improved to become more climate-responsive.

Upon the project’s conclusion in October, the Center’s project team presented their key findings on how DENR’s ten priority programs can be improved to become more climate-responsive. In addition, the team made recommendations on using the ridge-to-reef approach when looking at climate impacts and risks as a framework to craft policies and design programs for climate change adaptation and mitigation; strengthening inter-agency and cross-sectoral coordination and information sharing; and the necessity of localizing studies on the impacts of climate change given various global warming scenarios and capturing baseline data for climate change-related information to better understand how the country’s ecosystems will be affected in the future.

The Center has also begun implementing a more innovative and expanded Grant program, which looks into collaborative projects aside from the traditional research grants. This will allow the Center to work on co-produced projects that harness and combine the strengths of varied disciplines and sectors, such as journalism, science, arts and culture, in elevating public discourse on climate change, its impacts and possible solutions.

In the past year, several of the Center’s major projects have begun to focus on communicating climate change and its impacts, and involving multi-sectoral groups to engage in climate responsiveness and resilience.

The first of these projects was The Climate Dialogues, which featured international business strategist and author Andrew Winston last April 30. The two-hour forum and networking event focused on the new vision for business in the era of climate change and the drivers that should be considered in transforming traditional business models into climate-responsive ones.

Attended by 50 participants from 24 organizations from the private sector, civil society, diplomatic corps, national government agencies, and research agencies, the forum was able to surface issues that various sectors should address together, such as the role of big corporations in helping small businesses become more sustainable, private sector participation in the government’s climate initiatives, the necessity of green investments from the government and private sectors, and the role of the youth in pushing for climate action.

The 2nd OML Legacy Lectures held on September 30 continued the conversations borne out of the April discussion. Entitled “Everything But the Weather: Key Discussions for Climate-Responsive Companies”, lecturers Steven R. Wilson, PhD, director of Levoca Impact Labs and senior advisor to The Climate Service, and Valerie Kwan, manager of Asia Investment Group on Climate Change’s Climate Action 100+, discussed how companies can apply a climate lens to business risks and opportunities.

Private climate innovations and actions were described as “hidden in plain sight” and may be larger than the sum of global public adaptation and resilience programs and finance. Both lecturers underscored the importance of mainstreaming climate resilience across business sectors and utilizing the support of science as an opportunity for enterprise development and for enabling a transition to a climate resilient economy.

The lecturers were then joined by a panel of local experts in a discussion moderated by Stefanie Beitien, director of partnerships of Eco-Business. The panel was composed of Rex Victor O. Cruz, PhD, a member of the National Academy of Science and Technology and the National Pool of Technical Experts of the Climate Change Commission; Jerry T. Clavesillas, director of the Bureau of Micro, Small and Medium Enterprise Development of the Department of Trade and Industry; and Floradema Eleazar, outcome lead of the UNDP Climate Action Team in the Philippines.

The panelists gave their perspectives regarding the role of the private sector in promoting overall resilience, and shared resiliency programs and endeavors that are in place or being developed. Some issues and concerns raised during the discussion include investment opportunities in climate resilience, company disclosures and transparency, and developing a more whole-society approach to engagement on climate resilience. Over 160 guests attended the event representing the private sector, academe, civil sector, government agencies, multinational development agencies, non-government organizations, and research institutes.

The OML Center also participated in the Department of Education’s 3rd National Climate Change Conference held last November 18. Themed “From Lessons to Actions: Bridging Schools to Communities, Toward Addressing Climate Challenges”, the conference focused on the role of the academe in responding to the climate crisis and provided an opportunity for discourse and collaboration among government, academics, learners and other key
stakeholders.

The Center’s Executive Director, Dr. Rodel D. Lasco, participated as one of the mentors to three of the 12 featured climate action initiatives developed by high school student groups from various regions of the country in response to their community needs. The OML Center also provided cash incentives to the 12 student groups to support the development and scaling up of their projects.

In addition, Dr. Lasco conducted a Climate Change 101 breakout session attended by students, teachers, DepEd coordinators and representatives of local government units. The Center also set up a booth at the conference that featured quizzes and games to promote information on climate change and resilience, and an action wall where conference participants wrote their climate change calls and resolutions.

Another major project of the Center was the production and airing of Mga Kwento ng Klima, a documentary which tells the story of climate in the context of the Filipino experience and aims to break down information barriers by making climate change the ongoing story of Filipino resilience amidst increasing vulnerabilities. Produced in partnership with ABS-CBN Docu Central, the documentary not only looks into important issues regarding the climate vulnerability of Filipinos, it also highlights individuals and communities that have put solutions into practice and have built up their resilience to the risks that they face. The documentary took much inspiration and direction from mini-workshops that were held as part of the development of the content. The mini-workshops brought together experts, practitioners and actors in the Philippine climate change discourse to delve into themes surrounding climate change, including culture, land use, water and seascape, policy and public service, economy, and risks to sectors and industries, among others.

In conjunction with the Global Warming and Climate Change Consciousness Week, the Center held an exclusive pre-screening last November 22. The documentary officially aired on ABS-CBN DocuCentral’s “Sunday’s Best” on November 24. It is now available for viewing online via iWant or the ABS-CBN YouTube channel.

The Center aims to keep the momentum generated by the Mga Kwento ng Klima project, and generate more climate stories and build climate-informed communities in key regions of the country. Dr. Lasco has also continued to bring more informed climate change discourse to the general public through commentaries that have been published by the media on a variety of newsworthy and seasonal topics related to climate change. Twelve of his thought-pieces were published in 2019.

There is still a lot of work to do, but there is a global momentum around climate change that could make 2020 a truly pivotal year. The Center looks forward to new opportunities and deeper engagements with members of the Lopez Group in improving the climate resilience of our target communities. Building critical networks that will result in coordinated and comprehensive climate action is crucial to halt the most extreme scenarios of climate change.