A Decade of Walk-the-Talk with a Bang 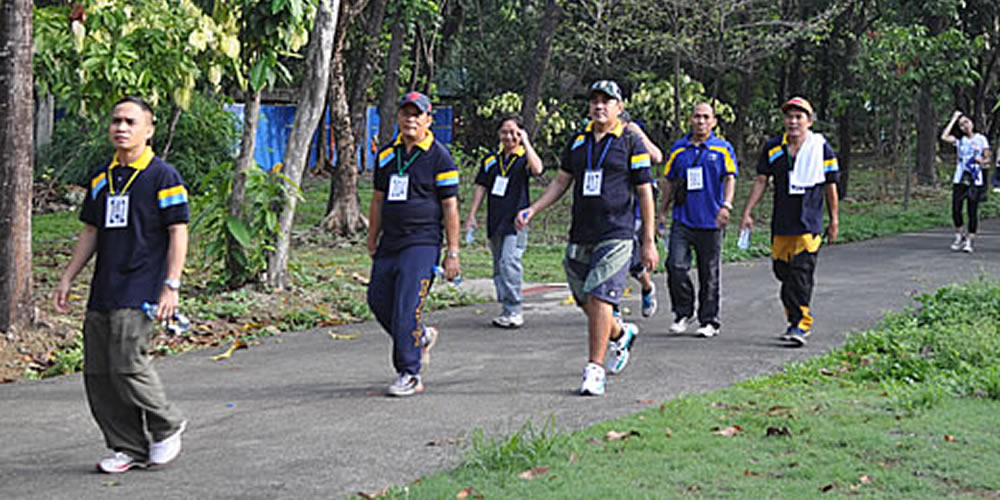 Successfully blessed by good weather amidst the rainy season, a gargantuan count of around 800 employees of the Lopez Group, including their family members and friends, attended the recently-concluded "Lopez HR Council-Lopez Lifelong Wellness Walk The Talk 10th Anniversary" last August 13, 2016 at the First Philippine Industrial Park (FPIP), located in Santo Tomas, Batangas.

Registration started at around 6:00 AM, as the number of participants continued to mushroom as time ticked by. Each registrant was provided with portable raincoats, and food stations were already situated to cater to the early patrons, serving taho, pandesal, and the like.

Hosted by FPIP and First Balfour, the program proper began with First Balfour’s Dolly Pasia and Macky De Lima performing the emceeing chores, and the Invocation courtesy of the VP for Corporate Services Jun Lizardo from FPIP.

After the Flag Ceremony, which was spearheaded by First Balfour’s Lace Ramos, Mehlanie Morada, also from First Balfour, led all participants in the recitation of the Lopez Credo and Values, and the Welcome Remarks were delivered by First Balfour President and COO Anthony Fernandez.

Before trudging the route, the well-wishers were once again "treated" with the traditional Stretching and Exercise portion, headed by Mr. Trini Trinidad of Whiplash and “Miss Saigon” fame, and the Rockwell Club, to jumpstart them for the long walk ahead, as well as the Safety Briefing courtesy of August Villalon from EDC’s Emergency Preparedness & Disaster Response Unit.

During the walk proper, the participants were given the opportunity to see the new developments and structures inside the “FPIP 2” compound.

Other route features that were offered by the host were a tree-planting activity along the walk route as well as a huge fresh buko refreshment station tent.

As the walkers arrived at the finish line, they were treated to a hearty brunch, as well as the announcement of the winners in the minor raffle.

Lopez Group HR Council head Cedie Lopez-Vargas then delivered an inspirational speech to the delight of the audience.

Next up was the “Lopez Group Zero Hero Puzzle Game”, wherein the five teams, assembled during the recent Lopez Badminton Tournament, competed in a race to assemble their assigned puzzle pieces to form “Zero Hero” slogans. The “A Pioneering Entrepreneurial Spirit” green squad, composed of employees from EDC, Lopez Holdings, and OML Center, won the said event.

Jovit Baldivino, the winner of the first season of “Pilipinas Got Talent”, serenaded the crowd to their utmost delight.

The awardees for “Perfect Attendance” followed suit as 77 employees were feted, with ABS-CBN having the most number anew with 19 walkers.

Five companies were also recognized for bringing in the most number of participants during Season 9, namely, ABS-CBN, Rockwell, EDC, Sky, and First Balfour.

This milestone day event ended with the Closing Remarks from FPIP President Edwin CoSeteng, followed with the raffle of the major prizes.

Anyway, regardless whether someone has won a prize or left empty-handed, the loads of priceless smiles generated by this momentous event just depicts how valuable a WTT event really is.

A venue for camaraderie, family-bonding, and wellness...rolled into one!