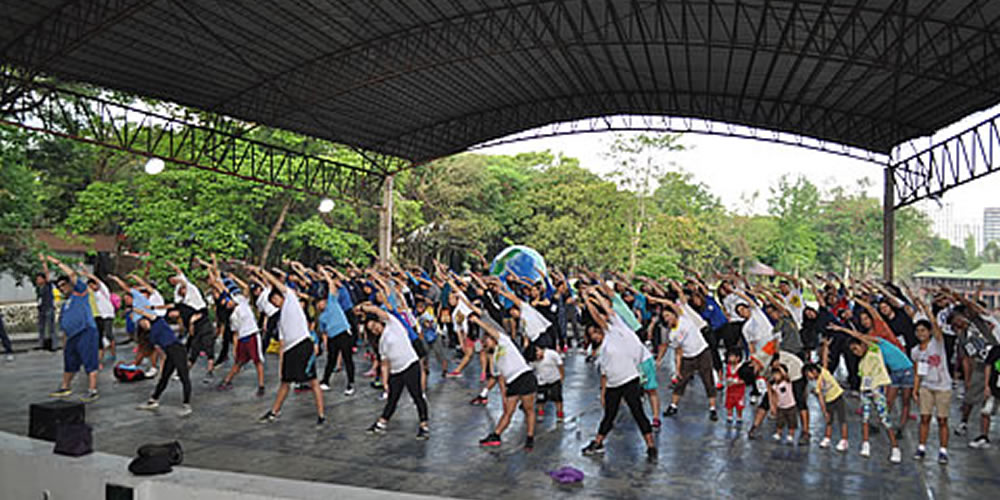 With Ayesha Volpane of FPH performing the emceeing chores, Third Gen’s Ruffus Doquero led the recitation of the Lopez Credo & Values and Remi Batallador of FPRC gave the Welcome Remarks.

The birthday celebrants for the month of July, with special mention of the late Don Eugenio Lopez, Sr., were then recognized, as the traditional Stretching and Exercise portion went underway as Trini Trinidad of Whiplash and the Rockwell Club spearheaded the entire crowd in warming up.

August Villlalon from the EDC's Emerrgency Preparedness & Disaster Response Unit (EPDRU) then provided a safety briefing to guide the participants for a much safer walking experience.

Since July is National Disaster Consciousness Month, the OML Center hoped to increase awareness in the Lopez Group employees about how to respond to common disasters experienced in our country.  To make it fun, they introduced the "Beware or Be +Aware: Disaster Challenge", wherein Ms. Mariana Lopez Vargas explained how the activity would be done.

Basically, the challenge involved each participant obtaining questionnaire booklets, containing questions regarding disaster preparedness and adaptation, which were distributed before the walk proper, and answering them along the way, as they passed by three stations. Each correct answer would garner certain points to assemble a virtual Go Bag from among a list of possible items.  The more points collected, the more complete the virtual Go Bag would be.  The best assembled virtual Go Bag, among other things, will win a prize. The OML Center will be announcing the winners soon on their website (www.omlopezcenter.org).

See you all in the 10th Anniversary of the Lopez “Walk The Talk” on August 13 at FPIP in Santo Tomas, Batangas.