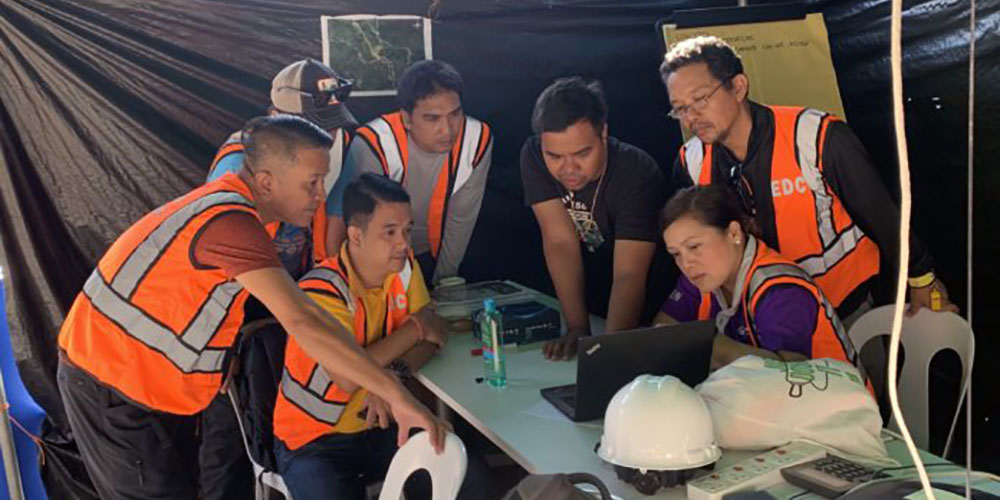 Members of EDC’s CSR and disaster preparedness teams assess the water needs of Barangay Ilomavis along with local officials. Almost a month since the first of a series of high-intensity earthquakes struck the province of Cotabato on October 16, proper sanitation and drinking water facilities remain a top priority among displaced residents in evacuation centers across the Mindanao region, according to local government officials.

In Barangay Ilomavis in Kidapawan City, Barangay Captain Datu Jimmy Mantawil identified around 1,400 evacuees from Purok 7, 6A, and 6B in need of toilets and access to potable water. With assistance from the Corporate Social Responsibility (CSR) team of Energy Development Corporation (EDC) and employee-volunteers from its  Mount Apo Geothermal Project (MAGP) and Southern Negros Geothermal Project (SNGP) and from the local community led by Datu Henry “Siakolon” A. Ambas, six makeshift comfort rooms were constructed at the evacuation site at Ilomavis basecamp where the evacuees were transferred to ensure their safety.

EDC’s Emergency Preparedness and Disaster Response Unit (EPDRU) from its Manila head office was also deployed to provide the necessary assistance to employees as well as to aid in continuous clearing operations of the local government of Kidapawan City.

More than 4,000 residents of Barangay Ilomavis and Balabag have received relief goods of rice, canned food, noodles, bottled water, medicines, and tents from EDC. “We are thankful to EDC for initiating this project to help our evacuees,” said Datu Mantawil.

Employees of EDC from its various sites as well as employees of other Lopez Group of Companies, namely First Philippine Holdings, FirstGen Corporation, FPIP, Rockwell, Lopez Inc, Lopez Holdings, LGFI, and private individuals pooled together their cash donations for the affected residents of Barangay Ilomavis.

“The Kapamilya spirit was certainly evident as employees wasted no time in doing what they could to help our communities in Kidapawan,” said Atty. Allan V. Barcena, Head of EDC’s CSR-Public Relations Group.

EDC is also working closely with the local government of North Cotabato, Kidapawan City, its Barangay Emergency Response Teams (BERTs) as well as local chapters of relevant government agencies and other civic organizations to continuously monitor the situation in the area and to provide necessary assistance.

EDC operates the 108.48-MW Mount Apo Geothermal Project and supplies clean and reliable power to Mindanao. It is a global pioneer in the geothermal energy industry and the country’s largest vertically-integrated geothermal developer, delivering 1,457.8MW of clean and renewable