Happy Tears: the encounter of Operation Sagip and Midwife Fe 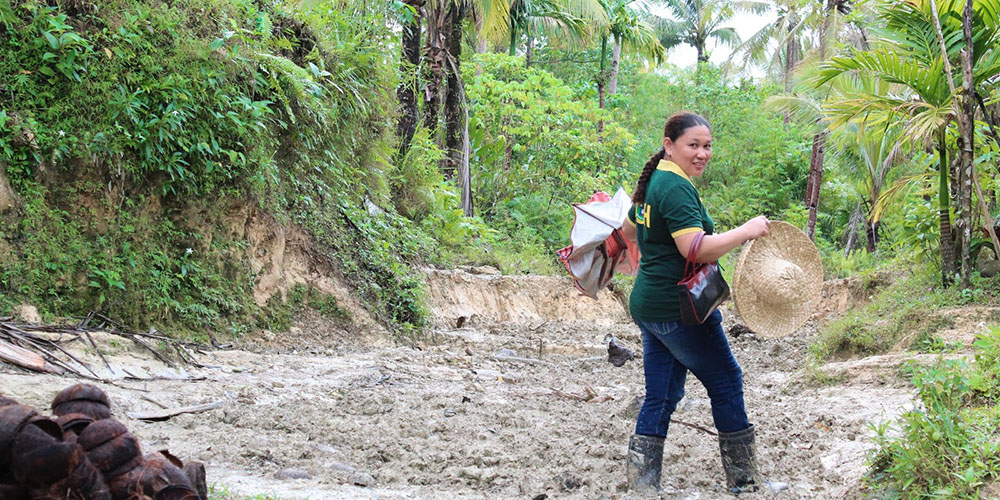 She has always wanted to be a midwife. It rooted from her experience even before she was born. When her mother was carrying her in her womb, the midwife said that it was a complicated pregnancy. It was a placenta previa case – the placenta grows in the lowest part of the womb, the uterus, covering a part or all of the opening to the cervix. This could cause severe bleeding for the mother. She and her mother could have died.

The midwife intensively took care of her and her mother until the day of delivery. She was incubated for 20 days.

Now, Fe Bantigue is the lone licensed midwife of Bgry. Casapa and its nearby barangays, in the municipality of Jiabong, Samar for the past 23 years. She was never assigned to a different place. For 23 years, she walks the same path to reach Casapa. She lives in the mainland of Jiabong. Twice a month, Midwife Fe checks on mothers for pre and post-natal care, on children for their immunizations, to conduct family planning teaching, and all other activities related to maternal and child health care.

The road to Casapa is never easy.

Twice a month, if she’s lucky, from Brgy. Pusongan of Motiong, Samar, Midwife Fe walks an hour along the 3.5-kilometer muddy, slippery and rough road that not even a bicycle can traverse. It’s an uphill and downhill trek at the same time. However, there are some unlucky days that it rains. An hour becomes two, even three to four. The path becomes more slippery and muddy. Sometimes, the mud is knee-high and becomes stickier. It sticks on the pants which also sticks to one’s skin.

There are no hand rails to hold on to. One would need a pair of boots or else, one may say goodbye to their pair of kicks. Though it’s an open area, one can never know what might happen. With somewhat a forest on the side of the way, it is a dangerous path most especially when one walks alone. There’s no means to raise a signal or a sound alarm if one gets lost or if something bad happens.

For the past 23 years, there were five months when Midwife Fe didn’t receive her salary. This is enough reason for anyone to quit -- but not her.

Aside from Midwife Fe, this is the scenario for everyone in Casapa. There is no mobile signal in the barangay except for one specific place. There are only two schools -- the Casapa Elementary School and Casapa High School, but, there are no hospitals or clinics. For children who need immunization, Midwife Fe does the sessions under the trees or she goes from one house to another. For pregnant mothers and sick residents, a hammock becomes their ambulance.

The barangay officials will ask the residents who own hammocks if they can borrow them. With whatever they can get, they will use bamboo poles to carry the patient on the hammock on their shoulders. They will cross the same road, just to be able to go down to the mainland and to a hospital to get treatment. For children, they would be placed in a big basket. This basket is like a backpack. This is also the reason why pregnant mothers prefer to labor at home. Though, home births may increase the risk of severe complications.

According to Scholars Sereen Thaddeus and Deborah Maine who conducted a study entitled Too Far to Walk: Maternal Mortality in Context, there are three delays that link to maternal mortality: (1) deciding to seek appropriate medical help for an obstetric emergency; (2) reaching an appropriate obstetric facility; and (3) receiving adequate care when a facility is reached. For the first delay, Midwife Fe has been consistent with her patients that no one should give birth in their own homes. Each pregnant mother is monitored. She sends texts, calls, and even mails them and their families about what to do and when they should go down. She tells them that they have to go down a week before their expected delivery dates. Sometimes, if they don’t, Midwife Fe goes to Casapa. With the help of volunteer Barangay Health Workers, the first delay is no longer a problem in Casapa. However, the second delay is. The birthing facility in the mainland of Jiabong is too far.

From this day forward, mothers who will have normal deliveries will no longer need to walk a 3.5km slippery and muddy road just to reach a birthing clinic for Casapa now has its own Barangay Health Station with birthing facility.

Through the donations for Yolanda-affected communities, Operation Sagip funded the construction of the Barangay Health Station. The medical and birthing equipment were also provided. The rooms are wide and well-lit. There’s electricity and water supply.

After six months, with the spirit of Bayanihan, with the community hauling the construction materials, may it be with their carabaos or with their own feet and arms, carrying them on their shoulders, walking back and forth on that rough path; while the heat of the sun scorches or the rain starts to pour, the health station was completed. The residents call it The White House. There were tears during the turn-over. Happy tears.

Mylene Gagbo, who also happens to be a volunteer Barangay Health Worker, a mother of four soon to be five, is one of the excited mothers. She still doesn’t know if she’s carrying a boy or a girl for Casapa didn’t have an ultrasound machine. Her first two babies were born with the traditional hilot while the other two were born in the birthing facility in the mainland. “Mas gusto kong sa bahay na lang talaga ulit manganak kasi magastos kapag sa sentro. Mahirap maglakad, wala kaming pera. Buti ngayon, meron na kaming health station, di na mahihirapan ang mga buntis,” she said with a smile on her face. (I really prefer to give birth here at home. It’s expensive to give birth at the mainland. You have to spend on your transportation, where you would stay, then you have to walk that road. We don’t have money for it anymore. But now, we already have a health station, we no longer need to go too far.)

There was a time when Midwife Fe reached a house where a mother was giving birth with a traditional hilot (birth attendant). The hilot placed a Papaya near the birth canal. It was their superstition that placing a papaya near it will speed up the placenta delivery. When she was not yet assigned in Casapa, there were mothers who die while giving child birth at home. “Minsan, sa isang taon, dalawa yung Nanay na namamatay. Bale nag retained placenta, hindi daw naagapan. Tapos yung nagbleeding din, nag-abortion. Three months pa lang yung pinagbubuntis.” she recalls. (In a year, sometimes, two mothers die. Someone died because of a retained placenta while the other was because of bleeding. She was three months pregnant.)

“Pero nung inassign na po ako dito sa barangay, sa awa ng Diyos, wala naman na kasi ipinapaintindi ko po sa mga pasyente ko at binibigyan sila agad ng health services. Kung minsan nga sinasabi nila na, ‘Ma'am ayaw kong bumaba kasi wala akong pera, wala akong pamasahe, wala akong titirahan doon.’ Sabi ko sa kanila, "kung yun lang ang problema nyo, tutulungan ko kayo basta nandoon lang kayo sa baba.” (But when I was assigned here in Casapa, with God’s mercy, we have no cases of maternal and child death. I make sure my patients understand the importance of giving birth at birthing facilities and they are given proper health services. Sometimes, they say they don’t want to go down because they don’t have money for transportation, they have no place where they can stay. I tell them, I will help them in ways that I can as long as they will just go down to give birth at the facility.)

Aside from Casapa, five other barangays will benefit from the facility. It will be the catchment for Barangays San Andres, Nagbac, Mercedes, Cristina, and Bugho. These barangays are the other barangays Midwife Fe goes to. The nearby but not really near barangays of Casapa.

Now that the second delay in Casapa has been resolved, the third will be as well. For Midwife Fe commits she will continue to help Brgy. Casapa. Once pregnant moms and sick residents, may they be young or old, come to the barangay health station, they will be greeted by Midwife Fe. “Kung kailangang matauhan dito araw-araw, gagawin ko po yun.” (If someone needs to be here in BHS every day, I will.)

The road to Casapa may not be easy but with people like Midwife Fe who becomes the bridge so others can reach out to those in need, perhaps, the road becomes a lot easier to walk on.