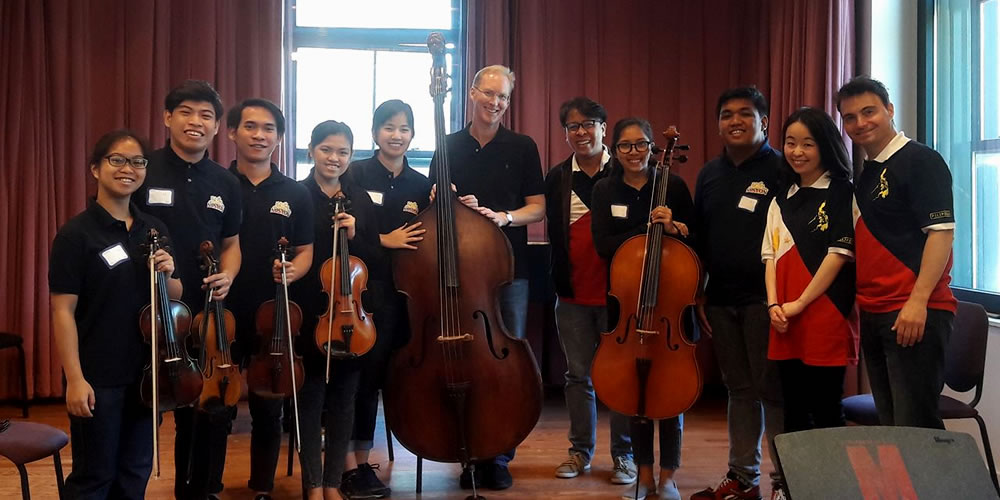 For most people, it takes a lifetime for a dream to come true. For others, it takes 10 or more years. For seven young members of the Orchestra of the Filipino Youth, it took a few intense yet fulfilling months for us to live a 3-week dream: travelling to the United States to represent the Filipino youth and the Philippines, to spread awareness in six concerts in three east coast states. I can only try to describe how we felt while we were in the US, experiencing total revelations, taking in the differences and wonders of everyday life in America, and realizing how blessed & lucky we are to be having these amazing opportunities at such an early stage in our lives.

Ang Misyon’s first International Awareness & Educational tour was held from May 19 to June 8, 2016. Violinists Ryan Rodriguez, Germain Gomez, myself, violists Vera Mei Cuevas & Sophia Chua, cellist Jovilyn Balilo, and double bassist Paolo Imperial were selected among the 58 members of the Orchestra of the Filipino Youth to form a Quorum – the chamber music element of Ang Misyon’s Sistema for the Filipino Youth. We were chosen based on the criteria of how we conduct ourselves socially, the level of positivity in our attitudes, the passion & desire to go beyond our known capabilities, talent & ability, and artistic integrity.

To me, practicing is something I am accustomed to. However, in the 2 months leading to the trip, Mr. Jovianney Emmanuel Cruz - the Artistic Director of Ang Misyon, and Mr. Juan Luis Munoz – one of Ang Misyon’s Artist-Faculty, pushed us to our limits, demanding of us impeccable intonation and execution of notes, along with emotion and artistic interpretation. They also required us to memorize the 8 pieces we would be performing - an exhausting task! But not only did this demand help us communicate better with each other, but we were able to perform more confidently as we were no longer shackled to our sheet music & stands.

The audiences at the Philippine Center, the United Nations, the Church of St. Francis Xavier, & the Brotherhood Synagogue in New York, the Church of the Epiphany in Washington DC, as well as the Zion Lutheran Church in New Jersey, overwhelmed us with multiple standing ovations we never expected to experience in this trip. The hospitality of the New York Philhamornic was equally overwhelming: they borrowed a cello from the New York Luthier Maestro Matthias Lehner & a double bass from their former Assistant Double Bass Principal Mr. Jon Deak for Jovilyn & Paolo to use throughout the tour.

In addition, the Vice President for Education of the New York Philharmonic Mr. Theodore Wiprud provided us coaching sessions with their members – the 27-year veteran Ms. Sharon Yamada and Teaching Artist Mr. Mitch Lyon. Ang Misyon’s Visiting Mentor Ms. Chie Yoshinaka also provided a masterclass for us with sensational violinist Mr. Peter Winograd of the American String Quartet. Their generous inputs made our sound much fuller and better, and enabled us to see our pieces from different perspectives. Not only that, it was unbelievable to visit some of the best music schools and performing arts centers in the world, some on a daily basis! We visited Manhattan School of Music, The Juilliard School, Lincoln Center for Performing Arts, and Kennedy Center for Performing Arts. It is still surreal to have gone to these legendary places we only heard about until now. We were also given special passes to observe live rehearsals of the NYPhil prior to their season concerts, not only once, but twice. I had to keep pinching myself to make sure I wasn’t dreaming. Their sound was as beautiful as staring at an artwork by Michelangelo, complimented by the stunning acoustics of David Geffen Hall. Absolutely breathtaking!

Most of us in Ang Misyon rarely have the opportunity to meet interesting people, dignitaries, or VIPs. Our social abilities were put to the test. Ang Misyon arranged a courtesy lunch with the President of Manhattan School of Music Mr. James Gandre, dinner with the Philippine Ambassador to the US Jose L. Cuisia Jr. and his wife Mrs. Vicky Cuisia in their DC residence, Consul-General Mario de Leon and his wife Mrs. Eleanor de Leon at the Philippine Center, and Ambassador Lourdes Yparraguirre of the Permanent Mission of the Philippines to the United Nations. They all made us feel at home by touring us around their respective sites and entertaining our questions about America and its culture.

In two very different yet especially memorable days during the tour, we too experienced what it felt like to be the teachers, the subject of attention, or the young “VIPs”. We were invited to give workshops with the children of New York’s El Sistema-inspired programs The Harmony Program and the Youth Orchestra of St. Luke’s. We were able to interact with younger violinists and cellists from these after-school music programs, and their innocence and honesty gave us a different way of seeing our art. After performing for the children, they poured out their questions and comments for us, among these questions were “What inspired you to play the violin?”, “How many hours do you practice every day?” At our every response, a reverent “WOW!” was echoed around the room, and my favourite reaction was a gleeful “I just had a mind explosion!!!!” after a particular piece. Their inputs were different than the teaching artists we encountered, but nonetheless equally refreshing and moving.

The concerts, the hour periods of music we agonizingly prepared for in months, the result of several all-nighters and frustrated breakdowns, and the reason that brought us together in the first place, were what turned – rather ‘metamorphosized’ - us seven from students to scholars, from musicians to artists, from simple Filipinos to recognized citizens of humankind. If preparing for the tour was a nightmare, each performance was an individual dream, putting ourselves out there and just performing our hearts out as if each was the last performance of our lives. After everything, we had a sense of fulfilment, relief, and pride – that we were able to represent our country with our music and that we were able to show to people that any person can play, but only few can play together with passion and unity.

So what did we get from our 3 weeks in the US? Not only did we go home with full hearts and suitcases, but we returned with more maturity and a stronger bond within ourselves and the people around us. We learned how to communicate effectively, not only in everyday life but also while performing. We became accustomed to each other’s habits and eccentricities. We also came home with lots of firsts – for me, it was my first time to be away from my parents for 3 straight weeks; our first time to commute the New York way – by walking, and walking fast and for long periods of time; our first time to experience the kind of cold weather in America; and our first time to try food such as Halal food carts, Shake Shack, and even Cuban fare! We also noticed that despite desiring to follow American culture, values, and traditions, Americans still cherish and appreciate the Arts more than we Filipinos do. I dream that someday, the Philippines will be able to be proud of its Artists without any reservations or conditions; that someday, every Filipino will be able to live and breathe the Arts.

Realizing that we were able to inspire people with our Art and our stories, made us proud and humble all at once: proud that we were able to do so as Filipinos, humble because we are just small pieces of the puzzle. On the trip, we were able to meet so many high-profile, talented people, and it made us realize that we are recipients of actions of major kindness and acts of paying it forward. It also made us obligated to pass on our learnings to those after us. Since we’ve encountered transformation and countless blessings through classical music, we yearn to help others experience it as well, so that we can lift our fellow Filipinos from the murky waters of drugs, poverty, and crime. Change on a large scale starts with a simple helping hand. After all, Classical Music is about Love, Joy, Passion, and Service!