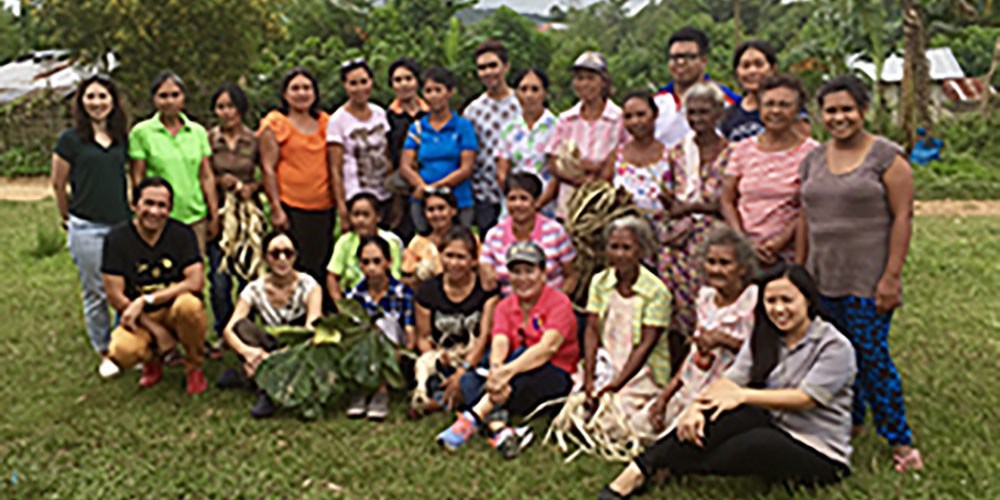 Bridges figure prominently across companies in the Lopez Group.

There’s Eugenio Lopez Jr.’s iconic bridges on air that served as the first “stone” in the foundation of digital behemoth ABS-CBN. First Balfour Inc. builds bridges, such as the P22.6-billion Cebu-Cordova Link Expressway.

Lopez Group Foundation Inc. (LGFI) has its magazine called Bridges that chronicles the Group’s CSR narrative. The foundation also uses a stylized span as its logo, underscoring its mission to “bridge the Lopez CSR family and stakeholders through sustainable nation-building partnership that links business excellence
with human and ecological security.”

Angela Lopez, head of Operations for LGFI, recalls: “They realized we had many foundations and there were duplicates of programs and activities.”

Tuck recommended that a new entity be formed to coordinate the different CSR endeavors.

“They came up with the Lopez Group Foundation, which became the umbrella organization for all the other foundations,” Lopez says of the results of the assessment.

With the new foundation in place, “we can come up with strategies to work together to promote better group-wide coordination and synergy,” OML had expressed following the creation of LGFI.

As the clearinghouse for all things CSR, LGFI, now with Cedie Lopez Vargas (MLV) serving as executive director, aims to develop a unified communication strategy for the Group’s CSR programs as well as a reporting and measurement format; build capacity in designing and implementing projects; and coordinate fundraising and volunteerism opportunities.

According to Lopez, LGFI gets its budget from a corporate initiative funded by the Lopez Group corporations, particularly First Philippine Holdings Corporation (FPH), ABSCBN, Lopez Inc. and Lopez Holdings. When necessary, as in times of natural disasters or for specific projects, the foundation also puts together its own fundraisers.

"With LGFI, the members gained a common identity, a sense of purpose,” notes programs consultant Dario Pagcaliwagan. He stresses the importance of “coalescing” with the Lopez Group for a shared purpose—to create value for the business and for the society in which it operates—in order for CSR to be sustainable.

“LGFI’s mandate is wide, we can do almost any kind of endeavor as long as it is for public good. Based on the Department of Social Welfare and Development, our areas of coverage are National Capital Region, Region 4 (Calabarzon), Region 6 (Western Visayas) and Region 8 (Eastern Visayas). We used to be nationwide except in ARMM, but DSWD trimmed it down based on our actual work for the past three years. However, that doesn’t preclude us from helping in other areas,” says senior program officer Monica Tan.

The LGFI team composed of five full-time staff and four consultants works with its members and affiliates to strengthen the way the Lopez Group does CSR.

For the Lopez Group CSR practitioner-members, the team organizes assemblies, summits and toolkit sessions on hot button issues, and prepares publications such as Bridges, among other services.

“If our new members such as Ang Misyon, Solar Sikat Challenge Foundation and OML Center need help with planning, networking and connecting with other groups, and even setting up their programs, we’re here to help them,” notes Lopez.

A major activity in member servicing is the Lopez Group CSR Council, the latest edition of which was held in March.

“It’s an informal council wherein we ask the other Lopez Group companies and foundations to share updates on their CSR activities. This is a platform for collaboration, for being able to work together,” says Coordination and Communications officer Jose Carlos Campos of the gathering. “We find ways to help companies that are starting their CSR activities; we also get to see those that are more ‘advanced,’ like ALKFI.”

The annual Lopez Group Synergy Summit, which the LGFI spearheads together with the Lopez Group HR Council also under MLV, is another major undertaking which incorporate components of CSR as well as HR and business excellence.

In the area of networking and collaborating with external stakeholders, LGFI is a staple in League of Corporate Foundations (LCF) activities, where its CSR practitioners often serve as speakers and resource persons in the LCF CSR Expo.

In strategic philanthropy, LGFI has concentrated its efforts mainly in Iloilo and Guimaras, where the Lopezes have roots. The latter province is also where the worst oil spill in the country occurred in 2006.

Lopez explains: “It’s giving, but there’s an objective in terms of certain goals, including the welfare of the people. We have guidelines on how to achieve that.”

With its original project—Halad Sa Kauswagan Sang Guimaras Multipurpose Cooperative—already self-sustaining, the foundation has exited and set its sights on a new endeavor.

It is currently working with the Department of Trade and Industry-Guimaras to help level up the province’s handicraft industry and bring the products to a bigger market.

“Partnership and collaboration is important in order to make an impact,” says Lopez of LGFI’s numerous endeavors. “That’s why we’re active in networking, in communities and associations.”