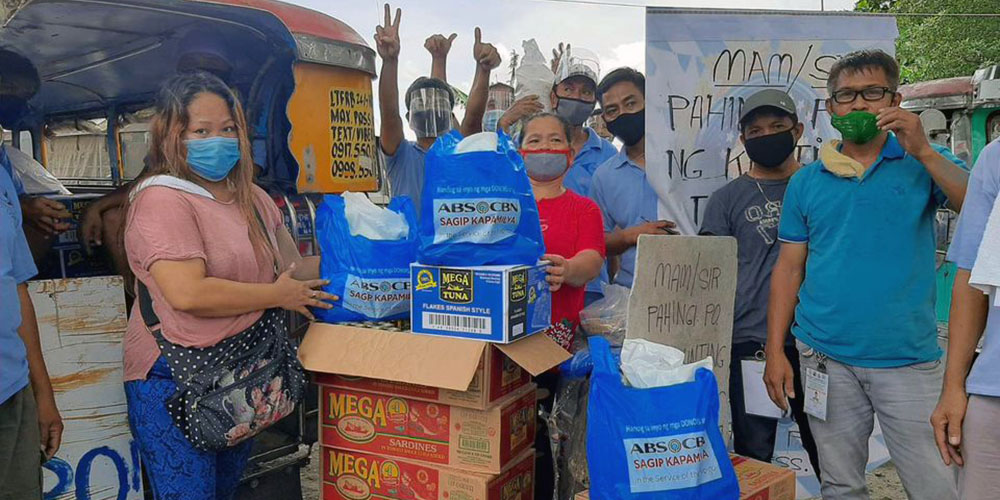 “Alam naming darating kayo”— a typhoon victim’s reaction upon seeing the ABS-CBN Foundation Inc. (AFI) team — might well sum up the Filipinos’ relationship with the foundation and, by extension, the Lopez Group.

“Alam naming darating kayo” come flood and fire, earthquake and landslide, typhoon and volcanic eruption, and COVID-19 and the closure of ABS-CBN.

Despite being limited, in more ways than one, by the novel coronavirus pandemic and ABS-CBN’s forced shutdown, the Lopez Group remains unstinting in its commitment to help as many Filipinos as possible through these singular circumstances.

First Philippine Holdings Corporation (FPH) chief sustainability officer Agnes de Jesus recently led a study to measure just how much of an impact the Lopez Group’s COVID-19 contributions have had. Using the widely accepted method called the “input-output analysis,” the FPH sustainability team measured the economic impact of Lopez Group contributions, which served as an additional investment to an industry, and how this investment affects the output of other industries and the economy as a whole.

The FPH sustainability team tallied the economic impact of each Lopez Group initiative vis-à-vis the value of the contribution using the following markers: a) direct effect, which measures the changes that happen in businesses that receive direct payments as a result of its operations and activities of the project; b) first indirect effect, which takes into account the increase in demand felt by suppliers as the businesses that receive the direct payments increase their output; and c) second indirect effect, which tracks the shift in household spending when a worker’s income changes from being employed by directly and indirectly affected businesses.

De Jesus’ team also computed for the induced production/ output, the total gross value of goods and services produced; induced value added, the additional value of a good or service as it went through production; and induced income of those employed, the expected rise in compensation of employees.

ABS-CBN gave a big chunk of the financial contributions, which were in the form of airtime for “Pantawid ng Pag-ibig” and for materials for the “Ligtas Pilipinas sa COVID-19” information campaign, personal protective equipment (PPE), meals, accommodation, shuttle service and a premium paid to employees, including third-party agency personnel, who were required to work on-site.

In addition, the network shelled out P151 million to continue paying the salaries of production workers whose incomes were affected by the cancellation of tapings. Based on the FPH sustainability team’s parameters, this had an estimated economic impact of P558,429,630.

FPH donated P100 million to the Philippine Ports Authority for retrofitting PPA passenger terminals into COVID-19 medical facilities. These included the Eva Macapagal Passenger Terminal, which has been turned into a 211-bed medical facility. It also donated laboratory equipment that enabled a tenfold increase in laboratory capacity for University of the Philippines-Philippine General Hospital.

Asian Eye and FPIP provided about P2 million each for shuttle support and PPE for workers in their respective communities, while AFI spent more than P12 million to keep Bantay Bata 163 and the La Mesa watershed operation running. KCFI allocated P8.6 million for its Stay at Home, Learn at Home program.

The data indicate that as of August 13, the Lopez Group had poured actual contributions worth over P1 billion into initiatives related to the COVID-19 pandemic relief efforts. Such spending from the Lopez Group itself is outside of public donations received by AFI, which are accounted for and reported separately.

According to De Jesus, the study digging deeper into direct and indirect effects showed that this direct contribution of P1 billion translates into more than P3 billion—P3,734,565,150 to be exact — in economic impact on various sectors of the economy.

The spending of the Lopez Group has generated an additional 2,351 jobs, De Jesus notes.

According to FPH corporate sustainability analyst Nicole Hubo, given the amount of donations, “Pantawid ng Pagibig” had the greatest impact in terms of contribution to the economy and jobs.

Going by the results of the assessment, De Jesus hopes for the continuation of humanitarian projects like “Pantawid ng Pag-ibig,” noting that economic valuation validated that it is “the right choice as a priority project.”

“In addition to the economic values, a rationale for this choice is the character of the Lopez Group. It is always one of the first to respond to challenges that face Filipinos. This response is best described by design engineer Sir Ove Arup, who said: ‘Humanitarianism implies a social conscience, a wish to do socially useful work, and to join hands with others fighting for the same values.’”

She also recommends that digital technology be utilized to deliver to the public real-time and truthful information on the pandemic. She adds that cultural programs may be created to promote solidarity in the fight against COVID-19, as well as programs related to mental stress and anxiety.

“Pantawid ng Pag-ibig,” the Group’s very well-received fundraising drive, has raised a total of P502,484,915 — split between P395,067,937 in cash and P107,416,978 worth of in-kind donations — as of September 1, says Paul Santiago of AFI’s project and donor management unit. The total includes the P100 million seed fund provided by the Lopez Group through FPH and ABS-CBN to start off the campaign in March. The seed fund allowed the AFI team to distribute relief to affected communities within the first week of the lockdown, in coordination with Metro Manila mayors.

At least 1,500 volunteers had enlisted in the effort to deliver relief packs to 896,000 families in the National Capital Region (NCR), Regions 1 (Ilocos), 3 (Central Luzon), 4A (Calabarzon), 4B (Mimaropa), 5 (Bicol), 7 (Central Visayas) and 8 (Eastern Visayas). They distributed hot meals to 174,568 individuals in NCR, Rizal and Cavite. “Pantawid ng Pag-ibig” also provided aid to a total of 150 hospitals and other institutions in NCR, Central Luzon, Calabarzon, Central Visayas and Eastern Visayas.

The second phase, “Isang Daan, Isang Pamilya,” was launched in June, about a month after the shutdown of ABS-CBN.

According to Santiago, when “Pantawid ng Pag-ibig” was launched in March, “the number of people reached with our calls for help was significantly higher. We were able to communicate the campaign across all socioeconomic strata.”

Following ABS-CBN’s exit from free TV in May and the eventual junking of its bid for a fresh franchise, AFI has had to make a pivot of its own.

“With the closure of ABSCBN, we lost our platform with the largest audience share and widest reach to broadcast our call for donations and our inspirational stories that move people to donate. As much as our resources will allow, we will also pivot and position our fundraising strategies in the digital realm,” asserts Santiago.

He adds that AFI aims to leverage ABS-CBN’s and its own digital assets as it explores potential digital donation streams. The foundation is also looking to form partnerships with theater companies, corporate partners and ABS-CBN artists for a series of events.

Santiago notes that other AFI programs also need support — Bantay Edukasyon, which hopes to help its scholars adapt to an online learning environment; and the Bantay Bata 163 hotline, which now also caters to individuals seeking support and counseling.

Meanwhile, AFI has worked out its program for the holiday season: “In December, we plan to distribute Noche Buena packages to help families celebrate Christmas. It is a time for families to gather, celebrate and be thankful for all the blessings they received for the year. We hope to be able to help families severely affected by the pandemic to continue this tradition of thanksgiving with hope for better things to come,” Santiago says.

Knowing the impact of one’s contribution, big or small, is certainly encouraging for Lopez Group members. Results of the analysis may spur more individual and group initiatives for the benefit of communities who need support the most.

After six months — and counting — of rigorously adhering to safety protocols whenever one needs to leave the house, and donating, supporting and extending help whenever possible, how else can a Lopez Group member further contribute to efforts to hurdle the COVID-19 crisis?

De Jesus says one way is to “foster the Kapamilya spirit in our family, team and company because the Lopez Values can unify and strengthen our resolve to work together on the Group’s humanitarian programs. This also means to be a good ambassador of the Group we represent.”