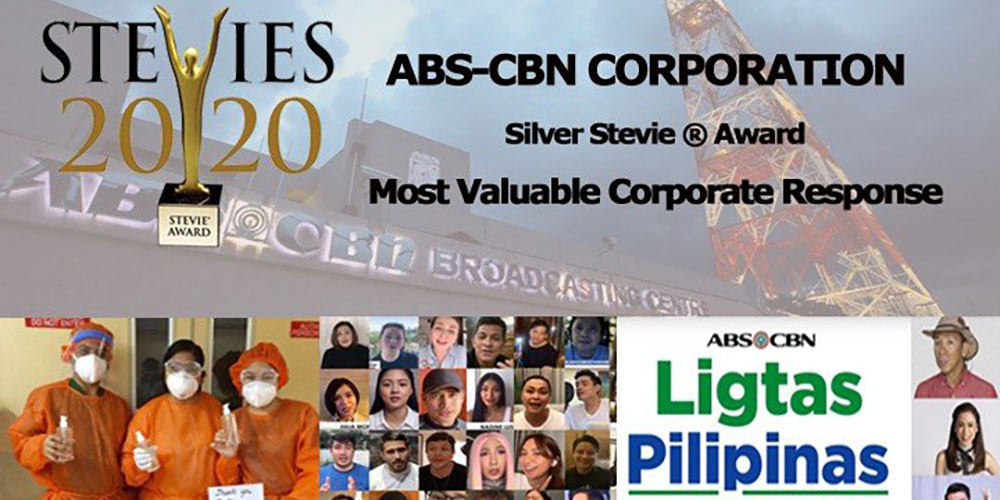 The international community has recognized ABS-CBN’s swift and compassionate initiatives to help Filipinos during the COVID-19 pandemic despite uncertainties over the renewal of its legislative franchise.

The network won a  Silver Stevie® for Most Valuable Corporate Response at the 17th International Business Awards® (IBA), which will have its virtual awarding on December.

The judges commended the Kapamilya network’s various response strategies to serve Filipinos when the COVID-19 crisis hit the country.

“ABS-CBN nobly answered the call to respond to the pandemic through a variety of impactful initiatives. The network’s dedication to their community is noteworthy,” said one judge.

“This entry is astounding due to the fact that ABS-CBN invested in assistance where needed whilst continuing to employ and to operate as a vital news channel,” another judge commented.

With about 70 million Filipinos watching its programs on TV, ABS-CBN kept Filipinos updated on the pandemic through its newscasts and entertained Filipinos with its inspiring entertainment programs on multiple media platforms. Its Ligtas Pilipinas sa COVID-19 information campaign, meanwhile, helped the government educate citizens about COVID-19.

Another effort that made a huge difference is ABS-CBN and ABS-CBN Foundation’s Pantawid ng Pag-ibig fundraising campaign in cooperation with local governments and the private sector. The network donated P50 million as seed money to the cause that has raised over P448 million cash and in-kind donations as of August 14 and has delivered food and basic necessities to over 880,000 families affected by the community quarantine.

Part of this effort was a groundbreaking digital concert featuring more than 100 celebrities from ABS-CBN that received 3.7 million views on Facebook, YouTube, and on ABS-CBN streaming services iWant and TFC.tv.

While it has gone the extra mile to look after the welfare of the Filipino people, ABS-CBN also ensured the well-being of its staff, crew, artists, and audiences by implementing safety protocols and work-from-home schemes while also continuing to pay salaries and numerous benefits to help them cope with the pandemic.

IBA or the Stevie Awards is considered as the world’s premiere business awards that confers recognition for achievement and impactful contributions of companies worldwide. This year’s competition attracted over 3,800 nominations from 63 countries.