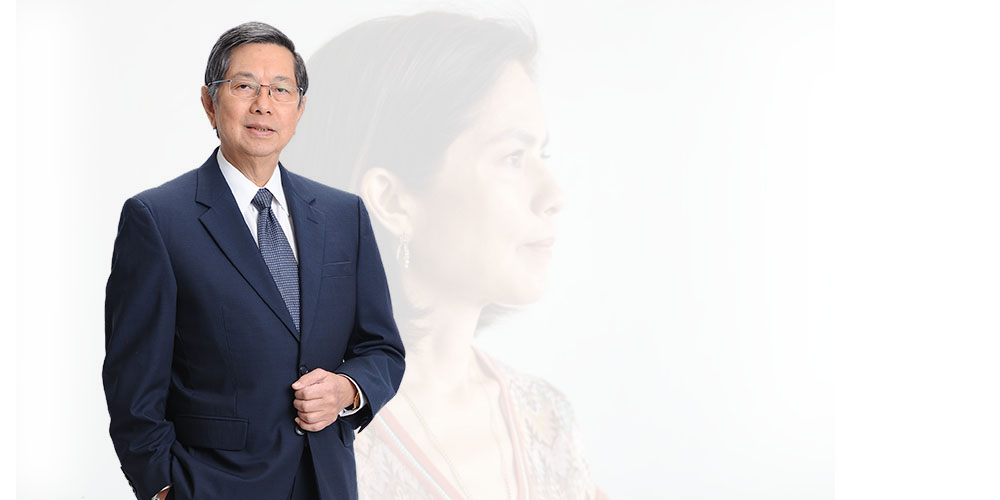 I cannot help but feel emotional with the Lifetime Achievement Award we just gave my niece, the late Gina. She was a truly admirable person from whom we all could learn so much.

I remember Gina in her younger days, really a free spirit. As many of you may have already heard her story, at 18 she left her family to join the Ananda Marga, which attracted her for its stress on meditation, the ascetic lifestyle and service to the poor.

This caused so much pain and anxiety to her father, my brother, the late Geny, and to all of us. For 20 years she was in the movement, living among the poorest of the poor in India, then Portugal, then Zambia, and finally in Kenya.

Geny and her mother, Chita, were able to visit her twice in that span of two decades, once in Zambia and the other time in Kenya. Every meeting was so emotional and brought my brother to tears. Gina’s own memories of those visits were very intense. You can read this account in the “Phoenix,” the book on the Lopez family by Raul Rodrigo. As she herself narrated, in Kenya, they were going into a restaurant but she couldn’t even enter because she thought it would be their last meal together. But it was a decision she made about her life and she stood by it.

Unknown to Gina, Geny would tell his friends in San Francisco, where he was living in exile during martial law, that he greatly admired Gina for her willingness to live under such circumstances and her commitment to serve others. Conditions were really dire where Gina lived. Her ration was one bucket of water per day. Can any of us here live on just one bucket of water for a whole day?

That showed not just commitment, but such enormous love for the poor, whom she served with great passion and determination. We could all learn from that, and how to commit to duty, love our neighbor and how to serve through our time and talent.

With respect to her work with the Lopez Group, Gina was the managing director of the ABS-CBN Foundation from 1994 to 2014. She pioneered educational television in the Philippines which put in place video libraries in 10,000 public schools. ETV aired in the span of 15 years a total of 16 educational programs over ABS-CBN which include shows on science, math, values, history and English. For “Sineskwela,” Gina was honored with the Unesco Kalinga Award, the first Southeast Asian to earn that distinction.

Gina launched Bantay Bata 163 in 1997—the first rescue hotline for abused children in Asia. Bantay Bata was the United Nations Grand Awardee for Excellence, besting 187 countries all over the world. In a span of 23 years, Bantay Bata 163 impacted the lives of over a million children through rescue, medical assistance, legal assistance, nutrition services and parenting seminars which promote positive discipline and the rights of children. In addition, Bantay Bata 163 built the Children’s Village, a halfway home which sheltered rescued children.

Through Bantay Kalikasan’s Save the La Mesa Watershed campaign, Gina was able to rally volunteers and donors to save the last remaining forest in the city at the turn of the century. The La Mesa watershed which was once classified as a severely disturbed forest is now home to 125 bird species, a newly discovered cave and more than one million trees, among others. The La Mesa Eco Park on the other hand has become a favorite recreation destination of families and students. It is also called the “prenup photography capital” of the Philippines for its popularity as a prenuptial pictorial location.

For the Pasig River rehab, KBPIP conducted social preparations to gain the trust of the members of the communities that were going to be affected by the rehabilitation. Gina went from house to house to explain the benefits of the rehabilitation to their quality of life and the environment. Her efforts led to mass relocation without hostilities. She also spearheaded and succeeded at the rehabilitation of the century-old Paco Market in an effort to clean the most polluted estero of the Pasig River, Estero de Paco.

Gina through KBPIP was able to relocate a total of 3,000 families of informal settlers who used to live on the Pasig River waterways in a 107-hectare resettlement community called BayaniJuan sa Southville (BNJ) in Calauan, Laguna. The community opened its doors to an additional 2,000 families who were affected by typhoon Ondoy in 2009. BNJ was managed by the ABS-CBN Foundation, which left behind for the community two schools, a wet and dry market, livelihood centers, medical clinic, sports field and a church when the project was turned over to the local government of Calauan in 2017. The project was a recipient of a $1.5-million grant from the Asian Development Bank from the Japan Fund for Poverty Reduction.

For her efforts in rehabilitating the Pasig River, Gina was appointed by former President Benigno Aquino as the chairperson of the Pasig River Rehabilitation Commission (PRRC) in 2010. And after her stint at the PRRC ended, the agency continued the rehabilitation using her KBPIP template which included social preparations prior to mass relocation, linear park development and the deployment of River Warriors, a team of community volunteers deputized by the PNP to ensure that the river is cared for. Because of Gina’s example during her term at the PRRC, the agency was able to continue a wellsupported rehab process. In 2017, the PRRC was awarded the Asia River Prize for the success of the ongoing rehabilitation of the Pasig River.

In June 2016, Gina was appointed by President Rodrigo Duterte as Secretary of the Department of Environment and Natural Resources. She closed 23 mines, suspended five others and pushed for the banning of open-pit mining. However, on May 3, 2017, the Commission on Appointments formally rejected her appointment as Environment Secretary.

Back to her private life, Gina established the I Love Foundation (I LOVE meaning “Investments in Loving Organizations for Village Economies”) with top business tycoons of the country in an effort to promote sustainable ecotourism and area development. Her vision of a country without poverty was her main driver. She launched her TV show, “G Diaries,” on June 4, 2017 to promote and gather support for her advocacy. In a span of just two years, the show has earned a total of 14 awards from various awardgiving bodies which include the Most Development Oriented Environmental Program at the Gandingan Awards 2019 given by the University of the Philippines, Best Host and Best Educational show from the PMPC Star Awards 2018 and Best Adult Educational and Cultural Program at the Catholic Mass Media Awards 2019. The show is currently hosted by her brother Ernie.

Gina became the first Filipino to be awarded the prestigious Seacology Prize on October 5, 2017 at Berkeley, California for her “exceptional achievement in preserving island environments and culture.”

May we all be inspired by Gina’s example, passion and dedication. May we be able to emulate Gina’s way of doing things out of genuine love!

I will miss our Gina, and I thank the LAA for giving her this moment to be honored by her own Kapamilya.

My thanks to everyone who served on this year’s screening committees and panel of judges. Thank you also to the many people who silently made today’s event a big success, including the special projects team under Ms. Chit Guerrero, technical and support teams from ABS-CBN and SKY Cable, and the various company representatives who made the multicast of the LAA 2019 possible, and all the those who helped ensure that we have an “LAA-level experience” here at The Fifth. And of course, to the Business Excellence team.